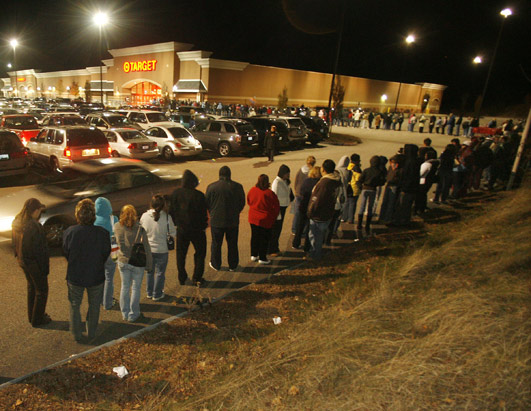 Media and PR Backlash on Retailers that Opened Through Midnight For Thanksgiving Day: Effect on Perception & 2014 Sales

I remember not even 5-10 years ago when Black Friday shopping started around 5 a.m. the day after Thanksgiving, and before that family traditions included Thanksgiving as a family, eating dinner around 5 or 6, then putting up your the Christmas tree in the evening. Families would then go to bed early stuffed or stay up late and enjoy a relaxing holiday just creating memories with family and friends. Thanksgiving of 2013 was a little different as stores this year began opening at midnighttempting the bargain hungry shopper so many did not even have a chance to go to sleep! This year the new tradition seemed to be that stores were beginning their sales at 6 p.m. on Thanksgiving Day, or even the day before and remained open through midnight to rake in those Black Friday dollars. Though safer than being trampled at Walmart , when shopping 2 days prior I was told by a cashier that the store would be open and I was saddened. My first response to her was “So does that mean it is a blackout period for you? You can not request off and may be forced to work?” Her reply was a shocking yes. At that moment I wanted to put all of my purchases back and not support that store any longer. When leaving I quickly tweeted and Facebooked about it that for 2014 I will shop mainly at retailers that are closed for the holidays, unless they are a supermarket because sometimes you forget the Cranberry Sauce. Not only was I mortified for their workers, I quickly realized that a large majority of shoppers this year felt the same way I did. So are the new retail traditions quickly becoming a Media and PR no no?

Because of the state of the economy, of course there will still be many people who choose to go to the sales, but it’s important for us to realize that people will jump at the chance for extra dollars in their check at the moment. But what is the true cost?  Among the stores that began the shopping madness on Thanksgiving Day were Walmart, Express, Target, and Macy’s. Some Black Fridayshoppers decided to protest these stores and start petitions but many people just decided to protest by not shopping until Black Friday morning. A In a statement, Macy’s said the decision to open on Thanksgiving was “in response to interest from customers who prefer to start their shopping early.” However public response in the media was a resounding no with many confused about Macy’s being the retailer that brings us the Thanksgiving day parade as an avid supporter of holiday tradition, encouraging otherwise.

Among the stores that decided to remain closed on Thanksgiving and open in the early morning on Friday are Nordstroms, TJ Maxx, Burlington Coat Factory, and Costco. Instead of receiving negative press like Macy’s these retailers are actually being praised. As a society, it has been agreed that most of non-essential our workforce should have major holidays to relax and spend with family. These stores abide our long time unwritten rule of receiving Thanksgiving as a vacation day and have pleased many of their employees.

The question at hand remains will these new holiday traditions for retailer’s effect their sales and the way the public views them throughout the year. The answer for me personally is a resounding yes.